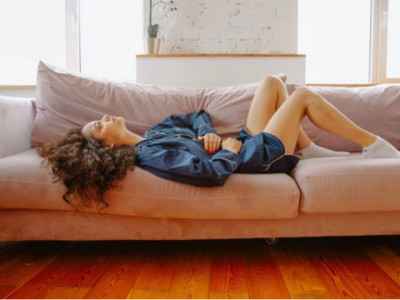 Any new mother can tell you that sleep is an important factor in how they feel, but a new study has found that certain changes in sleep and in biological rhythms are associated with how severe symptoms of anxiety and depression are during both the end of the pregnancy and the first few months of having a new baby.

The study, published Tuesday in the Journal of Clinical Psychiatry, followed 73 women in Hamilton, Ont., from their third trimester of pregnancy up until six to 12 weeks after giving birth.

Researchers say it is one of the largest studies investigating how sleep affects mood during the peripartum period — a term that spans the time shortly before, during, and after the birth of a child.

They found that changes in the circadian rhythm and being more active at night were linked to higher depressive symptoms.

Our findings highlight the importance of stabilizing the internal biological clock during the peripartum period to maintain healthy mood and minimize anxiety,” Benicio Frey, senior author of the study and professor in the department of psychiatry and behavioural neurosciences at McMaster University, said in a press release.

“Given the findings, future efforts should be made to standardize evidence-based interventions targeting these biological rhythms variables identified by our team, either as treatment or prevention strategies.”

The circadian rhythm dictates how our bodies understand when to grow tired and to sleep in a 24-hour period. If thrown off, it can have detrimental effects.

The release states that the three-month period before and after giving birth is one of the most vulnerable time periods for the mental health of the parent in question. Around 15 to 18 per cent of women experience anxiety during the peripartum period, according to the release.

For the study, researchers recruited 100 women in Ontario between November 2015 to May 2018. Out of that sample, 73 women returned for follow-ups at one to three weeks postpartum and six to 12 weeks postpartum, for a total of three study visits.