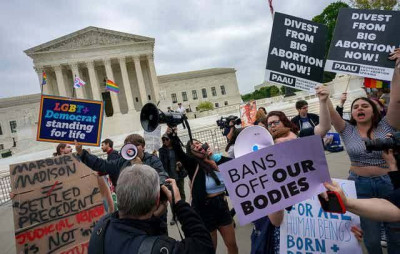 What does it mean for states like Maryland upon overturning Roe v/s Wade?

How does abortion ban becomes an economic issue?

‌Democrats called the supreme courts ruling to overturn Roe vs. Wade called illegitimate." It isn’t up to you, this illegitimate court, or a bunch of states elected officials to decide what happens to a woman’s body… that choice belongs to a woman and no one else! Period!!!" the DNC chairman said.

His wrath was also reflected in many parts of America, especially in the March For Our Lives, a student-led group that supports gun control legislation, said they were "appalled" by the Supreme Court’s decision to overturn 50 years of abortion rights.

"It’s clear to us that the Court is more interested in scoring political points than protecting the rights enshrined to us in the Constitution," the group said in a statement.

"We are watching the erosion of rights promised to us long before we were born by an unelected, unaccountable, undemocratic Court packed with illegitimate judges forced through by a president who lost the popular vote."

Speaker of the House Nancy Pelosi reverberated this claim in a statement and said, "Because of Donald Trump, Mitch McConnell, the Republican Part,y and their supermajority on the Supreme Court, American women today have less freedom than their mothers.
"Radical Republicans are charging ahead with their crusade to criminalize health freedom," she added. "GOP extremists are even threatening to criminalize contraception, as well as in-vitro fertilization and post-miscarriage care."

Now that this ruling has come we all know the future. American women are being taken away from their choice, their freedom! Is this the American Dream? Is this for what many people sacrificed their life and work hard for long years? America has turned into a misogynistic democracy(I don't know how long I can call it 'Democracy')