Cristiano Ronaldo refuses to support LGBTQ+ at the 2022 Qatar World cup in any way. 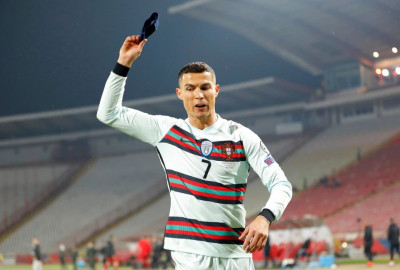 Cristiano Ronaldo will not be wearing the one love captain arm band at the FIFA World Cup Qatar the idea was refused by the Portuguese captain.

Whereas, The captains of various countries like England, Wales, Belgium, the Netherlands, Switzerland, Germany and Denmark will not wear 'OneLove' armbands at the World Cup under pressure from FIFA.

The One love arm band is a multicolored Arm band which is weared to support the LGBTQ+ ( Lesbian, Gay, Bisexual, Transgender ) community.

But FIFA has threatened to issue yellow cards to any player wearing the multi-coloured armband which was introduced to support diversity and inclusion.

I really feel like that just wearing an arm band will not create any problem while playing in the tournament. So FIFA should have allowed the players to wear the Multicolored one love band to support LGBTG+ Community.

What do you think about this decision of FIFA ?

Let me know your opinion in the notes..