Covid-19 vaccinations: More than 50 nations have missed a target set by the WHO. 💉 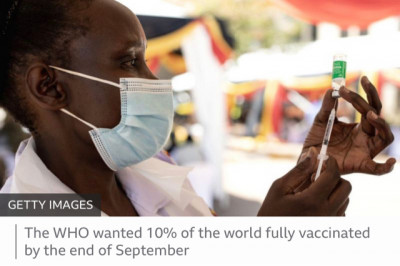 More than 50 countries have missed the World Health Organization's (WHO) target for 10% of their populations to be fully vaccinated against Covid-19 by the end of September.
Most are in Africa, where the WHO's overall figure for those fully vaccinated is currently 4.4%.
In the UK, nearly 66% of the whole population has been fully vaccinated, in the EU about 62% and in the US it's 55%.
Which countries have not reached 10% target?
Many - but not all - are low-income countries, grappling with vaccine supply and health infrastructure issues.

Some suffer from conflict or civil unrest such as Yemen, Syria, Iraq, Afghanistan and Myanmar, while others like Haiti have been hit by natural disasters, making the task of rolling out vaccines very difficult.
But wealthy Taiwan, whose vaccine programme has been dogged by delivery delays and other issues, is still just below 10%.
Vietnam, which until a few months ago, had some of the lowest numbers of coronavirus cases globally, has also fallen short of the 10% target.

Many of [the more highly vaccinated] countries are in the upper-middle or high-income brackets and have procured vaccines directly from manufacturers," WHO Africa regional director Matshidiso Moeti says.

Why has Africa fallen behind?
African states relied on a combination of bilateral deals, donations and the Covax vaccine-sharing scheme to get their programmes started.
Earlier this year, countries struggled to get supplies via Covax, but the situation improved in July and August.
Wealthier countries announced donations to Covax - or directly to African nations - at the G7 summit in the UK in June.