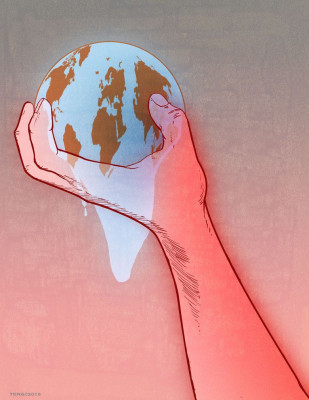 what a meaningful picture

Climate is the average weather in a place over many years. Climate change is a shift in those average conditions.
The Earth is now in a period of rapid climate change, with global temperatures rising.
Climate change will transform the way we live, causing water shortages and making it harder to produce food. Some regions could become dangerously hot and others uninhabitable because of rising sea levels. Extreme weather events - like heatwaves, downpours and storms - will become more frequent and intense, threatening lives and livelihoods. People in poorer countries, which are least able to adapt, will suffer most. It is undeniable that human activities have warmed the atmosphere, ocean, and land and that widespread and rapid changes in the atmosphere, ocean, cryosphere, and biosphere have occurred. Earth-orbiting satellites and other technological advances have enabled scientists to see the big picture, collecting many different types of information about our planet and its climate on a global scale. This body of data, collected over many years, reveals the signals of a changing climate.