Celebrities easily get away with imperialist actions because of fandom culture 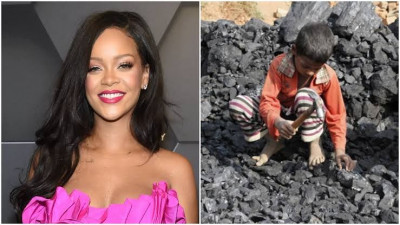 We are quick to jump at the throats of businesses when they do something problematic, and we should. Although it's a futile attempt but we do come together to stand against the wrongs of them. However, celebrity culture stops people's 'idols' from being held accountable for their behavior.

It's absolutely mind boggling how western billionaire artists owning fashion and beauty lines—or any for that matter — get away with exploitating labour from developing countries. Especially when the charges were so gross.

Be it Taylor Swift's private jet or Rihanna's Fenty. Fans jump to defend them at any calling out. Just a year ago an Indian organization filed a complaint with the National Commission for Protection of Child Rights (NCPCR) against Fenty for child labor that is carried out for the mining of Mica that Fenty uses in its products. Do non-western lives worth so less and their children deserve no protection from such evils? We know this would have not been tolerated in the states!

Any person abusing just one child would face legal consequences and be cancelled by the public, but these companies abuse hundreds and thousands of children and still get supported by the population. Fandom culture has always been toxic but excusing something like this is ridiculous.

These accusations have been forgotten like they never happened while children in India are still in the same vulnerable position. Nothing has changed for them and we, as a first world country, continue to add to their miseries while not only exploitating their people but polluting their environments as well. Just like we understand that buying from Amazon is not okay, we need to understand to not buy from the brands of otherwise "likeable" celebrities.