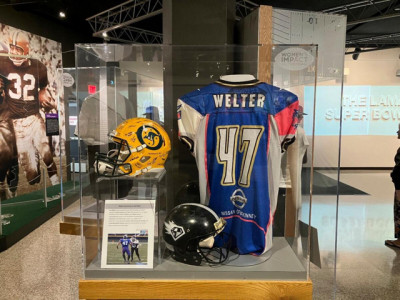 On Friday, a 15-year-old boy visited the Pro Football Hall of Fame museum, looking at the bronze busts and artefacts before pausing to take a photo of Jen Welter's blue-and-pink uniform to send to his younger sister.

US News reported that Zach Fleming, a Pittsburgh Steelers supporter visiting with his father for the first time, predicted that she would adore this. I want her to realise that women can achieve Hall of Fame status as well.

When Welter joined the Arizona Cardinals in 2015 as an assistant coaching intern for training camp and the preseason, she made history by becoming the first female head coach of an NFL game.

The “Women’s Impact on Football” exhibit debuted ahead of this week’s enshrinement festivities. It features artifacts from women who have played, coached, officiated and broadcast the game at its highest level.

“There’s a lot of women involved in pro football and we wanted to recognize their contributions and tell their stories,” said Ben Ankrum, assistant curator at the Pro Football Hall of Fame. “We’ve had other exhibits featuring women in pro football and it got to the point where we could do something larger and more permanent.”