Can we do anything to bridge toxic polarization in politics? 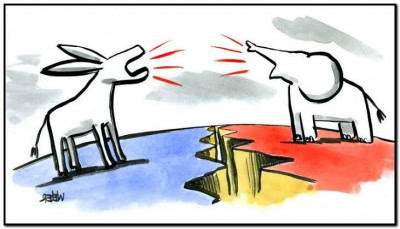 It took a while to realize what was building up but now sharp political polarization has been a fact of life in many countries. The conservatives-progressives debate is the chief factor in electoral politics, be it the US, the Americas, Europe or elsewhere. Social media has given a multiplier effect. Often it is not a healthy political debate but a highly toxic discourse. Democracy, it’d seem, is on the verge of a breakdown.

After the US elections of 2016 and Brexit, there have been a plethora of studies and books on this subject. Of late there have been some more, with a common thread: Let’s begin with ourselves. Let’s rethink our positions.

* “The Divide: How Fanatical Certitude Is Destroying Democracy” by Taylor Dotson (MIT Press)

Key quote: “The first step is for citizens to recognize their own impairments.”

Key idea: Political polarization is driven by not our disregard for facts in a post-truth era, but rather by our obsession with truth. Dotson argues that we don’t need to agree with everyone, or force everyone to agree with us; we just need to be civil enough to practice effective politics: https://mitpress.mit.edu/books/divide

* “The Way Out: How to Overcome Toxic Polarization” by Peter T. Coleman (Columbia)

Key quote: “Think and reflect critically on your own thinking.”

Key idea: Deploying the concept of attractors in dynamical systems, Coleman explains why we are stuck in this rut as well as the unexpected ways that deeply rooted oppositions can and do change. He details principles and practices for navigating and healing the difficult divides: http://cup.columbia.edu/book/the-way-out/9780231197403

* “Sustaining Democracy: What We Owe to the Other Side” by Robert B. Talisse (Oxford)

Key quote: “We need to find ways to manage belief polarization within ourselves and our alliances.”

>>Elizabeth Kolbert, reviewing these books at The New Yorker, is not convinced. Arguing from the liberal side, she says the two camps are not equally responsible for toxicity and the two won’t share the burden of self-introspection equally: https://www.newyorker.com/magazine/2022/01/03/how-politics-got-so-polarized