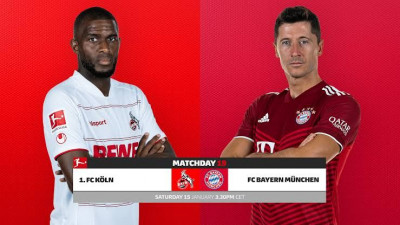 
6 placed Koln will face Champions Bayern Munich at Rhein Energy Stadium Koln. It was a 3-2 thriller when they met previously this season at Munich. Bayern would like to forget their unexpected Loss to Monchengladbach while Koln will try hard to register a 4th successive win.


Star Stricker Robert Lewandowski is again racing ahead with 20 goals so far after his record breaking 41 goals in previous season. Leverkusen's Patrick Schick is behind him with 17 goals. Modeste of Koln is 4th with 12 goals. Other scorers for Koln are way behind with 3 goals - Skhiri and Uth.


In last 15 meetings between Koln and Bayern, Bayern has won 14 and 1 was drawn. But, on 22 Aug 21 Koln fought back denying an easy win for Champs. After a goalless first half, Bayern took a 2-0 lead (Lewandowski 50', Gnabry 59'). But, Koln replied with 2 quick goals from Modeste(60') and Uth(62'). Gnabry again came for Bayern's rescue with an exquisite long range goal in the 71st minute to finish the match 3-2.