California's first native American judge gets confirmed by the senate. 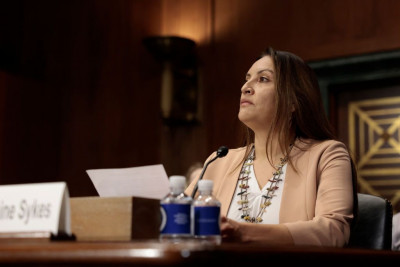 Sunshine Suzanne Sykes, who was confirmed by the Senate by a vote of 51-45, will become the first member of the Navajo Nation to serve as an Article III judge anywhere in the country.
Article III judges are jurists appointed to lifetime appointments on federal district and circuit courts, as well as the Supreme Court.
As a judge on the Superior Court of Riverside County in California, Sykes attended the court’s appellate division and civil litigation department. She had spent eight years as deputy county counsel for Riverside County where she represented government agencies and the California Department of Public Social Services in cases of abused and neglected children.

She also spent two years on contract with the Southwest Justice Center representing children and families in juvenile court. Sykes earned her undergraduate and law degrees from Stanford University.

The Senate also confirmed two other federal district judges Wednesday night. Jennifer Rochon was confirmed by a vote of 51-47 to a post as a district judge in the Southern District of New York.

Rochon has served as the general counsel for the Girl Scouts of America. She also spent time in private practice with Kramer Levin Naftalis & Frankel.

The Senate also voted to confirm Judge Trina Thompson to a post as a district judge for the Northern District of California. Thompson, who was confirmed by a vote of 51-44, spent two decades as a judge on the Alameda County Superior Court based in Oakland.

It is good to see more women being represented in courts. It is a concern that a native American judge is being appointed in America in 2022! It took years for America and the senators to even think about electing Native Americans to the court. How many more years do we have to wait to see a Native American woman becoming the President.