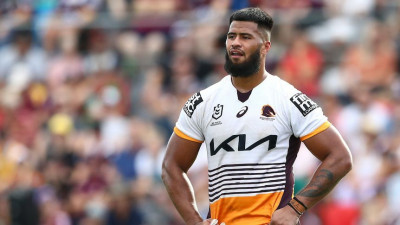 Brisbane Broncos prop Payne Haas has asked for an immediate release from the club following a breakdown of contract negotiations.

Haas is contracted until the end of 2024. But he was in negotiations to have his contract upgraded.

He has been named in the line-up for Brisbane's clash with the Titans at Lang Park tomorrow night, and is expected to be selected in the Blues squad in the coming days for State of Origin Game I.

Brisbane released a statement on Thursday afternoon indicating they would not grant the release.

"Payne Haas is contracted to the Brisbane Broncos until the end of the 2024 NRL Season. The Club will not be entertaining a release," the statement read.

"The club remains in ongoing discussions with Payne's management about what the next phase looks like for him at the Broncos. That includes ongoing dialogue about an extension to his current contract."

It comes as the Broncos' three-time best and fairest winner engages in a courtroom battle with former manager Chris Orr, who is entitled to a commission until the current deal he has struck expires.

Since changing managers, Haas has been angling for an upgrade, saying he is being underpaid on his current deal.

The Broncos reportedly tabled a $6 million contract that would have been the richest in NRL history for a prop forward, only for the 22-year-old to knock it back.

The Sydney Roosters are believed to be very interested in Haas, while the NRL's new Dolphins franchise is on the hunt for a marquee man, and younger brother Klese has just signed a two-year, full-time deal at the Titans.

The prop has also been the subject of three separate NRL integrity unit investigations during his time at the Broncos.

Earlier this season, he was suspended for his scuffle with teammate Albert Kelly.

The 22-year-old was last year accused of intimidating a female police officer and in 2019 was punished for failing to cooperate with an NRL investigation.