Brahmaputra: Understanding the rage of the river through 700 years of water discharge history 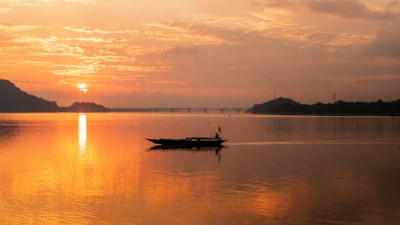 “He no longer saw the face of his friend; instead, he saw other faces, many, a long sequence, a flowing river of faces, of hundreds, of thousands, which all came and disappeared, and yet all seemed to be there simultaneously, which all constantly changed and renewed themselves. He saw the face of a fish, a carp, with an infinitely painfully opened mouth, the face of a dying fish, with fading eyes – he saw the face of a new-born child, red and full of wrinkles, distorted from crying – he saw the face of a murderer, he saw him plunging a knife into the body of another person – he saw, in the same second, this criminal in bondage, kneeling and his head being chopped off by the executioner with one blow of his sword – corpses stretched out, motionless, cold, void – he saw the heads of animals, of boars, of crocodiles, of elephants, of bulls, of birds – he saw gods – he saw all of these figures and faces in a thousand relationships with one another, each one helping the other, loving it, hating it, destroying it, giving re-birth to it, each one was a will to die, a passionately painful confession of transitoriness…”
Hermann Hesse’s “Siddhartha”

This touching passage is one of the finest metaphorical expressions of a river that reflects life in its multifarious manifestations. Rivers anywhere are lifelines of the place and the people, and when it comes to the river Brahmaputra, it assumes a far greater significance because of its origins and the landscapes it flows through.

With its antecedents traced to the Manasarovar lake region around Mount Kailash, the mighty trans-boundary river Brahmaputra is the ninth largest river in the world by discharge, and the 15th longest flowing through southern Tibet, then into Arunachal Pradesh and Assam (as the Brahmaputra) and flowing further south into Bangladesh as the Jamuna merging with the Ganga in the Ganges Delta and finally into the Bay of Bengal.

Read the full story her:- https://theprobe.in/brahmaputra-understanding-the-rage-of-the-river-through-700-years-of-water-discharge-history/