Boris Johnson: Fifty people to be sent to Rwanda in a fortnight 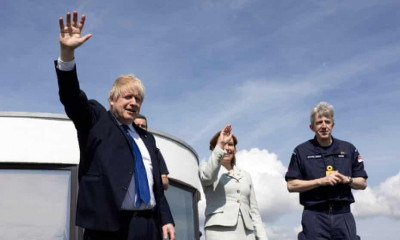 ‌Boris Johnson said he is ready to fight with the lawyers who are challenging the plan of government in the case of refugees. Boris Johnson said 50 people have been told they will be sent to Rwanda within the next fortnight.
‌
‌Under the £120m scheme, people who have entered the UK unlawfully will be transported to the east African country, where they will be permitted to apply for the right to settle. The strategies have faced widespread criticism from human rights charities as well as from some Tories.
‌
‌When asked if he may react with a review of the European convention on human rights, Johnson said: “We’ll look at everything. Nothing is off the table.”
‌
‌Tom Pursglove, the minister for justice and tackling illegal immigration, said decisions to transport asylum seekers to Rwanda would be assessed on a “case-by-case basis” and did not deny that people fleeing war in Ukraine could be among them.
‌
‌After the statement about the government’s relocation scheme, more than 160 charities and campaign groups called on the prime minister to discard what they described as “shamefully cruel” plans.

The archbishop of Canterbury used his Easter sermon to question the move, saying there were “serious ethical questions about sending asylum seekers overseas”.

May, a former home secretary, said she did not support the idea “on the grounds of legality, practicality and efficacy”.

What is your take on this? Migration is a difficult task and people being forced from one country to other like puppets are awful. When they choose the UK and can accommodate them, then why are they being moved to some other country? Is this what you do to the ones who seek help? We even don't know if the country is safe and how they are going to manage living expenses and many other aspects of living!