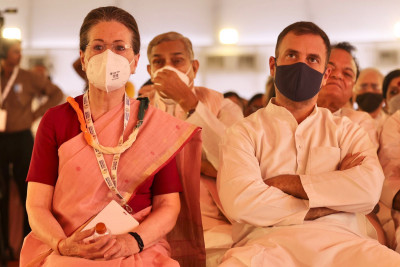 It means more empty slogans, diversionary tactics and utter silence of an ever so eloquent Prime Minister when the healing touch is most needed.

It is not just the undermining of our long-cherished values that are now at grave risk. The fires of hatred and discord that are being ignited have taken a heavy toll on peoples’ lives. This is having serious social consequences.

The BJP, its cohorts and surrogates want to keep our people in a state of perpetual frenzy and conflict. They constantly provoke, instigate and inflame.  We have to combat this growing virus of divisiveness that is being maliciously and mischievously spread.  This we must do at all costs.

We must sustain high economic growth to provide adequate employment opportunities for our youth, generate revenues needed for welfare programmes and improve the standard of living of our people. But the worsening environment of social illiberalism and bigotry shakes the very foundations of economic growth.

Starting with the disastrous demonetization of November 2016, the economy has been on a steep downslide. A large majority of MSMEs have been crippled. Unemployment has risen alarmingly and for the first time it appears that vast numbers of people have simply stopped looking for jobs.

Whatever support the central government has been able to provide in the past two years to people has been on account of at least two landmark initiatives of the Congress party—Mahatma Gandhi NaREGA and the National Food Security Act.

The sheer tenacity of the farmers and their organizations compelled the Modi Government to repeal the three black farm laws. The Congress party stood by them steadfastly throughout their long struggle, both within Parliament and outside.  But the promises made by the Prime Minister to the farmers when they withdrew their agitation have yet to be fulfilled. Meanwhile it looks as if procurement of wheat this year will fall steeply threatening the very foundations of our national food security.