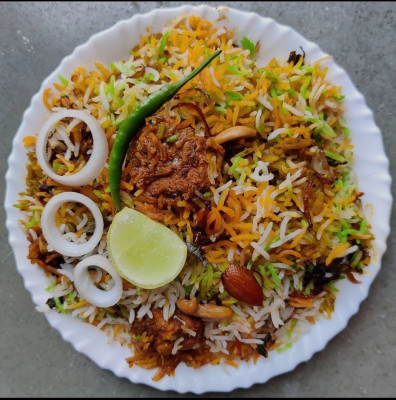 Really !! It looks so delicious 😋😍

Biriyani, perhaps one of the only few dishes across the globe that doesn’t need any introduction.
A dish that initially originated from Persia but got its current status in India. When Mughal Queen, Mumtaz Mahal, saw her soldiers weak and malnourished and asked the chef to prepare meat and rice together to give them nutrition-rich food. Since then, it became a delicacy of both rich and poor.
A plethora of biryanis emerged as the biryani got introduced to the Indian subcontinent.
Moradabadi Biryani, Hyderabadi Biryani, and Lucknowi Biryani, to name a few. Whether it is about the strong and rich blend of spice in Hyderabadi Biryani or light and less spice in Moradabadi Biryani, whether you are a spicy food lover or not, it can satisfy everyone’s hunger.

Having been savored almost seven different types of biryanis, my taste buds remain famished for Lucknowi Biryani, also known as Awadhi Biryani, from a small yet old outlet IDRIS KI BIRYANI.
Initially, like every north Indian biryani, biryani was made from Brown Rice, later replaced by Basmati Rice. The meat and rice are cooked separately and then transferred to a pot in layers and cooked on low flame. When finished cooking, each rice grain is free, and the meat becomes highly tender. Due to being cook by ‘DUM’ and divine fragrance, the exquisite flavor, due to the use of saffron and rose water, is perhaps one of the most delectable food ever.