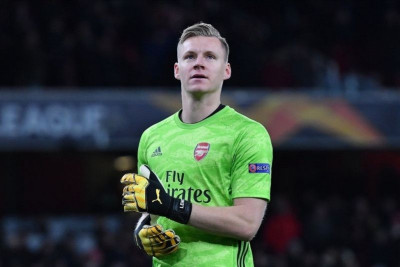 Benfica is quite interested in signing Arsenal goalkeeper Bernd Leno this summer but is
hesitant to meet Gunner’s valuation of 8.5 million euros.

Leno is all set to leave Arsenal this summer after he lost his space in the side of Aaron
Ramsdale.

As reported by The Sun, Benfica is a possible destination for Brend Leno but the two
clubs have so far been unable to agree upon a fee.

Meanwhile, long-term midfielder target Fabian Luiz has reportedly rejected an extension
deal with his current side Napoli which has put the Gunners on red alert. And the Serge Gnabry return to Arsenal transfer Saga still continues to rumble on as
reports suggest that the Bayern ace is yet to respond to his club’s contractual offer.

In July, Arsenal has already struck a deal to bring in new revolution English goalkeeper
Matt Turner. Bernd Leno just made four appearances this season while he featured only
eight times across all competitions.

The 30-year-old is eager to get back to the Germany squad ahead of the FIFA World
Cup 2022 but has not been called up by his country since November.

Leno joined Arsenal from Bayer Leverkusen in 2018 for 22.5 million euros and has
played 125 times for the club in total.

According to the Sun, a host of other players could also leave Arsenal. Matteo
Guendouzi and Konstantinos Mavropanos have already secured permanent switches to
Marseille and Stuttgart respectively.

Hector Bellerin, Pablo Mari, Ainsley Maitland-Niles and Lucas Torreira could also depart
permanently having all been out on loan this season.