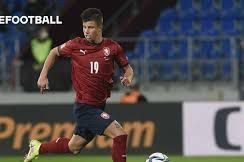 The 19-year-old will join Leverkusen on a five-year agreement that will keep him at the club until 2027.

Hlozek has already made over 100 appearances for Prague, scoring 40 goals and providing 36 assists.

Following a fantastic 2021/22 season in which he picked up 12 goals and 15 assists in all competitions, the 12-cap Czech international turned the heads of Europe's biggest teams.

Borussia Dortmund and Arsenal were said to be interested in Hlozek, but Leverkusen came out on top in the competition.

When he moves to Bay Arena, he'll be looking forward to reuniting with his countryman, Patrik Schick.

Schick was a standout for Die Werkself in the just finished season, scoring 24 goals in the Bundesliga, second only to Robert Lewandowski.

The 26-year-old has been linked with a transfer away from Leverkusen, but the club is determined to keep him.

Leverkusen finished third in the Bundesliga, ensuring a spot in the Champions League for next season.

The Czech kid, who can play on both flanks and as a second striker, is most well known for his finishing and inventiveness.

But the new question which arises from her is...

Is Hlozek's arrival the end of Schick's time at Leverkusen?

Fans around Europe will be following Hlozek's arrival at Leverkusen with bated breath, wondering if the German club will try to sell some of its current strikers to make room for the new star. That certainly appears to be the case when looking at the current team. Leverkusen have four central strikers in Joel Pohjanpalo, Lucas Alario, Sardar Azmoun, and Patrik Schick ahead of next season. While supporters of Bayern Munich and Arsenal may want to see the latter sold in the coming months, it's far more probable that Alario will follow Pohjanpalo out the door.