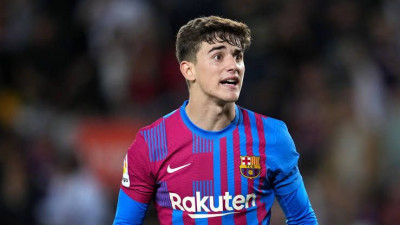 Barcelona achieved its goal when Xavi Hernandez took control of the club achieving Champions League qualification. They did so with a 2-1 victory over Real Betis which mathematically ensured some financial stability for the club next season.


That means, there is a lot of talk in Barcelona that can turn almost entirely to preparing for next year if they haven’t already. Regardless of big transfers, Barcelona is as focused on tying down their current stars as giving renewals to Pedri, Ansu Fati and Ronald Araujo.

The outstanding name from that list is Gavi. The 17-year-old has burst onto the scene this season, becoming a crucial part of Barcelona’s squad and making his international debut. After the victory, last night against Real Betis, sporting director Mateu Alemany was asked for an update on his contract situation.


“Gavi wants to stay. We have been talking for a long time and the two parties have the same idea that he will be a player at Barcelona for many years.

Against Real Betis, there was also a start for Neto Murara with Marc-Andre Ter Stegen absent with illness. Alemany was then quizzed on his future at the club, desperately trying to free up the wage bill for them.


“Neto is a great goalkeeper, with Ter Stegen being a guaranteed starter and settled. We have the area covered; Neto has another year left on his contract. We are happy with the goalkeepers in our academy that are standing out like Inaki or Arnau.

Rayo Vallecano goalkeeper Stole Dimitrievski had revealed that he had a great deal to join Barcelona in January, but Neto’s refusal to leave had scrubbed the deal.