Ballon d'Or and after: Messi, Ronaldo may play together 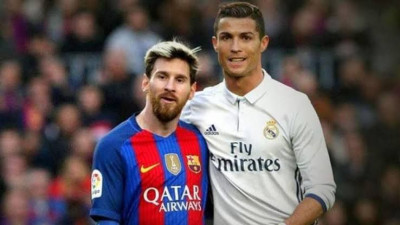 Are we going to witness the most beautiful (and unexpected too) scenario in world football next season? Is the long wait to watch Lionel Messi and Cristiano Ronaldo playing together coming to an end, finally? Well, all of us can keep our fingers crossed for the moment, but there is a strong transfer rumour that Ronaldo’s agent Jorge Mendes has offered his client to Paris Saint-Germain next season. Like all transfer gossips, this too has more than one ifs and buts attached to it. Romaldo can leave Manchester United and join his long- time rival Lionel Messi only if Kylian Mbappe does not renew his contract with PSG. It doesn’t end here. There should be a potential scenario in which 36-year-old Ronaldo decides not to finish his career at Old Trafford.
Even if the story published in a section of the Catalan media has no truth, it can’t be dismissed as an innovation of a fertile mind. Because Ronaldo was linked to PSG even before – in fact, early this year there were talks about the Portuguese coming to Paris to form a dream combination with Messi. It didn’t happen as Ronaldo instead decided to travel to England when he said goodbye to Italian giants Juventus.
Yet, any chance of Messi and Ronaldo playing in similar jerseys is a mouth-watering prospect. It also gives rise to the speculation that Ronaldo could be feeling unwanted in United, especially in the Ralf Rangnick regime. He is still the hero of Old Trafford – only recently he struck twice in the 3-2 victory over Arsenal, but will he fit into Rangnick’s scheme of things? Rangnick is famous for having his own exclusive game plans and that under him it could be a busy transfer season for United is already in the air. Only a few days back one witnessed a sublime war of words between Ronaldo and Messi over Ballon d’Or award; while Ronaldo said he never aimed at overtaking Messi in number of awards, the Argentine said he didn’t foresee anyone winning it more than him in future. Time, they played together to prove the game was always bigger than individuals.