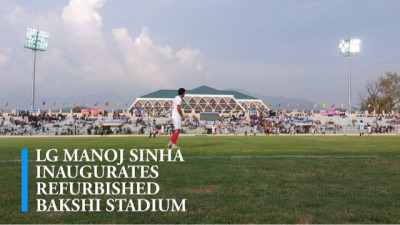 In Srinagar, the Jammu and Kashmir government opened an international-caliber football stadium as a present to the valley. The stadium was built in accordance with FIFA standards. A refurbishment and improvement have been made to Srinagar's centuries-old Bakshi Stadium so that it can now host both national and international football competitions. The stadium cost Rs 44 crore and can accommodate more than 20,000 people. The stadium is outfitted with equipment to hold games and competitions both during the day and at night.
Football has always been a popular sport in Kashmir because it is so popular with young people there. Additionally, the new stadium will help to promote sports more, giving young people in the city a global stage.
“For the youth of Kashmir, Bakshi stadium has always been a place of dreams for the youth who made it so big in the sport. The upgraded and renovated stadium is handed over to those who love the sports. It was the PM Modi, who had given Clear orders that this stadium should be made according to the FIFA standards. I am happy that with a cost of 50 crores, we are handing over the stadium to the youth of valley. I am thankful to sports council, and everyone associated. I am hopeful and proud of youth from Jammu and Kashmir to make India proud. Jammu Kashmir is becoming a hub of sports.” Said LG Manoj Sinha.
With the opening of this stadium, the Kashmir Valley's athletes are overjoyed. Six of its blocks contain food courts and a variety of other amenities. There is a unique commentary box, a VVIP box, and a dressing room in the stadium. The stadium will have four floodlights and natural grass turf. The Indian government has been pushing for Jammu and Kashmir to become a sports centre.

Ishfaq Ahmad, a football coach, said: "The skill will improve as the infrastructure does. After this stadium opens, I'm hoping we'll have football players of the highest calibre. Every arrangement has been made in accordance with FIFA regulations. I constantly believe that the Kashmiris' love of football would propel them to great heights."