Aubameyang: Barcelona have incredible potential to do well next season 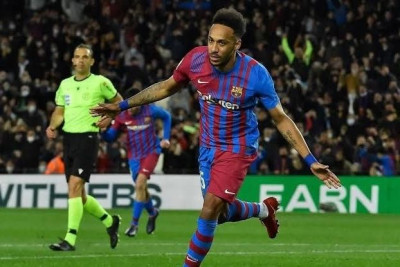 With the talent in their roster, the 32-year-old believes the Catalans can have a successful
season next season. After missing out on the La Liga title this season, Barcelona star Pierre-Emerick Aubameyang believes they will return with a great team next season.

The Catalans missed out on the title after finishing second in the 20-team standings with 73 points, 13 fewer than rivals Barcelona and champions Real Madrid. The 32-year-old former Gabon international, who joined Barcelona on a free transfer from Arsenal in January, feels that with the amazing talent at their disposal, Barcelona will have a better season.

“There are a lot of incredibly talented young players who just need to work and believe in
themselves and go for it,” Aubameyang said as quoted by Sports Barca.

“When you’re young, the more you play, the more confident you are. So this is the reason why Barca will return. This team has incredible potential.

“Pedri, Ansu, Gavi... They all have something special. They come from La Masia and directly to the first team. They’ve been here since they were young and that’s the best, you have to be
proud of them.”

For the Catalans, Aubameyang scored 13 goals in all competitions. Since joining the club on
February 2, 2022, he has appeared in 17 games in La Liga, starting 13 of them and coming on as a substitute on four occasions.

The attacker scored 11 La Liga goals and added one assist, making him the club's second-leading scorer. Aubameyang last scored on May 10 against Celta de Vigo, scoring a brace in a 3-1 victory.

His first two goals of the season came in a 4-1 win over Valencia on February 20. He scored 10
goals and had three assists in 29 Premier League outings for Arsenal last season. He appeared in 128 league games for Arsenal, scoring 68 goals and assisting on 16 occasions.