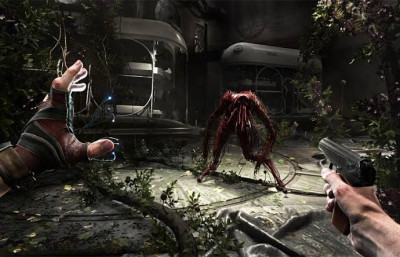 For fans of Bioshock and Soviet themed action games, Atomic Heart is definitely something to be excited for. Taking place in an alternate Soviet Union, it proudly wears its Half Life and Bioshock influences on its sleeve though it has its own original ideas as well, making it a new adventure with new abilities in a familiarly unfamiliar setting.

The game’s distinctive art style is instantly eye catching, packed with lush forests, eye-catching architecture, and all manner of spooky and cartoonish machinery. It’s noticeably vast, creative, original, and frankly a bit hard to soak in all at once given the game’s immense scope and noticeable ambition.

The robots are a visual delight and terror, while their aesthetics are indeed brilliant, they pack a seductively terrifying look and air about them wit their razor blades, electric pulses and deathly cold demeanour. Atomic Heart is an open world game, filled with mobs of enemies and dungeons designed in a linear manner, all connected narratively to each other for the player to dip in and out of.

These dungeons are where the majority of main missions lie and comprise of learning more about the facility, the people behind it, and what exactly has gone wrong there. The player battles through whole areas patrolled by rogue AI units before facing off against a challenging boss.

A relatively simple if known pattern, the game may not be out to reinvent a familiar structure, but is also not out to bore, adding just enough of something new to keep it a fresh enough, to make it an item worth craving for.

IGN’s 20+ hour campaign footage in the end features wildly imaginative enemy design, world structure and the sort of retro-futurist tech that makes it highly reminiscent of the Fallout series. Indeed there is a sort of bleakness and sense of nihilism here that is highly prevelant in Fallout. Therefore, boasting a potent but unusual mixture, calling Atom Heart the Soviet Fallout + Bioshock+ Half Life+ Halo is not really much of a stretch.