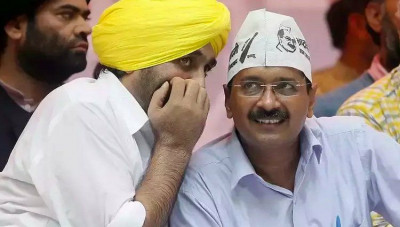 Chandigarh: Aam Aadmi Party (AAP)’s freebie announcements in the run-up to Punjab assembly polls in February this year were believed to be among the key factors behind the party’s thumping victory in the state.

Prime Minister Narendra Modi’s recent ‘revdi culture’ comment was mainly seen as a jibe against Kejriwal’s freebie politics since AAP is increasing its footprint in Modi's home state where BJP is unbeatable since 1998.

Amid the growing debate about whether freebie politics is a sound policy to deal with various social issues, Kejriwal made another announcement during his Gujarat visit on Wednesday, August 10 after his earlier assurances of free electricity and unemployment allowance to Gujarati youth.

This time he announced Rs 1000 per month allowance for all women above 18 years of age in Gujarat if his party forms government in the country's western state.

However, his party, which has been ruling Punjab for the last five months, is yet to implement the scheme.

Punjab Chief Minister Bhagwant Mann made several statements in the past two months, assuring the scheme’s implementation very soon. But he has not made it time-bound yet.

Furthermore, AAP’s maiden budget in Punjab that was presented in June this year also skipped the allocation of the necessary budget for the scheme, signalling that women in Punjab will have to wait for more months before they get Rs 1000 per month in their bank accounts.

The opposition in Punjab continues to target AAP for befooling the voters with their “unrealistic” promises.  In a statement, Amarinder Singh Raja Warring said, "I want to ask Mr Kejriwal that before making a promise to Gujarati women, it is not his moral responsibility to fulfil this promise first in Punjab."