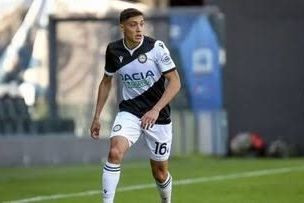 According to rumors in Italy, Arsenal is planning a deal for Udinese right-back Nahuel Molina.

Due to the injury to Takehiro Tomiyasu, Mikel Arteta has been forced to rely primarily on Cedric Soares on the right side of his defense this season.

Arsenal are reportedly looking for cover in the position and have entered the competition to
recruit Molina this summer, according to Il Messaggero Veneto.

According to the source, Juventus and Atletico Madrid are keeping tabs on the 24-year-old
Argentine.

However, because Pablo Mari has been on loan at Udinese since January, Arsenal may have
the upper hand in discussions.

The Serie A team wants to make the move permanent at the conclusion of the season, and Arsenal may consider a swap deal including Mari and Molina.

Argentina has capped Nahuel Molina 15 times.
Molina is thought to be worth roughly €30 million (£25.3 million) to Udinese.

Pierpaolo Marino, Udinese's sports director, stated last week that striking an agreement with Arsenal on a permanent deal for Mari may be "tough."

Marino stated that "Mari is an Arsenal player, so his arrival at Udinese is already exceptional."

"Not because we don't deserve it, but because the route is generally in the opposite direction."

However, Pablo Mari has stated that he is "very pleased" at Udinese and that he wants to
continue in Serie A beyond the season's end.

Mari joined Arsenal for £14 million from Flamengo in July 2020 following a brief loan spell at Emirates Stadium, but has only appeared in 19 appearances for the club in all competitions since then.

Mari has made eight Serie A appearances for Udinese, all as a starter, as head coach Gabriele
Cioffi has taken a liking to the center-back.

In that period, the Italians have only achieved three victories, three draws, and two losses,
dropping to 13th place in the league as a result.