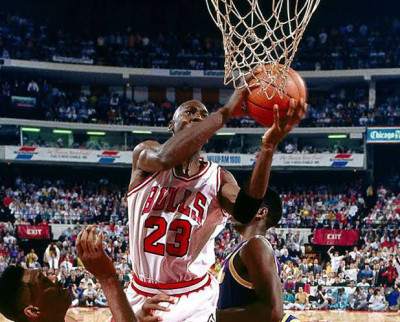 Since NBA has been there for 75 years, there have been some breathtaking moments.

Every year, we see moments that define the season, but there are very few of those that define an era of basketball and are permanently etched in our memories. One of those moments was Kawhi Leonard‘s Game 7 buzzer beater against the Sixers in 2019.

One such shot was attempted by Michael Jordan in Game 2 of the 1991 NBA Finals, a statement making shot by MJ left everyone jumping out ps their seats. The Bulls and the Lakers were going at it, and MJ took the game over. On a drive to the basket, MJ switched the ball from his right hand to left, mid-air, and made the basket.

To give you some context, any time a players goes for a dunk, their body adjusts according to the hand that is making the dunk, their body weight shifts accordingly, and to change that mid-air requires godly skill and dare I say, some defiant arrogance.

But to top it all of, to attempt something of that stature in an NBA finals, is something only MJ could have contemplated AND achieved.

A moment like that comes along once in a lifetime and we were blessed to watch a genius at play. So when Nick Wright came forward to call it basic, he became the target of unprecedented trolling (all deservedly earned).

Twitter users had a field day with Wright as he was trolled for his horrible takes.