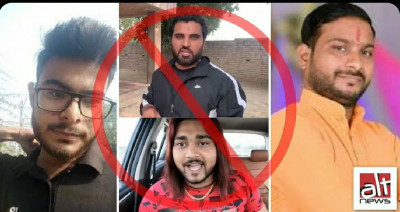 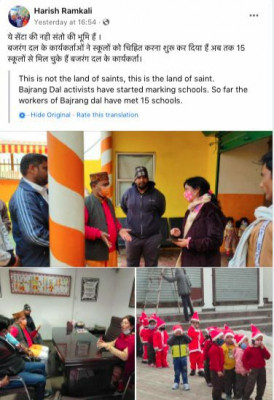 On December 23, 2021, Harish Ramkali, a member of the Bajrang Dal in Haryana, posted on Facebook that any school that dresses its students as Santa Claus without prior permission from parents would have a case filed against them and be closed.

This was one of the several threats that Ramkali had made on his Facebook page in the lead up to Christmas last year that saw a spate of violence against the minority Christian community.

On December 12, Ramkali uploaded a video where he could be seen mobilising people against a Christian pastor whom he accused of religious conversion in Haryana. “The Valmiki community of Jind is standing up against them (the Christian community),” Ramkali could be heard saying amid chants hailing the Valmiki god, and slogans of ‘Jai Shri Ram’ and ‘Bharat Mata ki Jai’.

Harish Ramkali, aka Harish Saini, is a resident of Jind, Haryana and a leader of the Bajrang Dal. Starting out as a district president of Akhil Bharatiya Vidyarthi Parishad (ABVP), Ramkali has slowly risen up the ranks in the Sangh. He was the student head of the Haryana wing of the Vishwa Hindu Parishad (VHP) before his appointment in the Bajrang Dal.

Last year, a group of protestors comprising of scheduled castes, backward classes and lawyers assembled at Rani Talab in Jind for a protest march against the Citizenship Amendment Act (CAA). When the Muslim protestors decided to offer namaz as per their daily routine, they were stopped by members of the Bajrang Dal and the Gau Seva Dal. Ramkali threatened the Muslim protestors of ‘dire consequences’ if they offered namaz at the site.

In a video that he uploaded on Facebook in July, he accused the Muslim community of ‘land jihad’ and took responsibility for demolishing ‘illegal’ Mazars (shrines). “Whether you go to Delhi, Haryana or Rajasthan, [‘land jihad’] is rapidly increasing. It is the greatest threat to Hindus after ‘love jihad’. Bajrang Dal has removed several ‘illegal’ Mazars with the administration’s permission,” he says. The video had over 4 lakh views.