ALOK: Are You Ready to Heal? (If There’s Anything You Watch/Listen/Experience, Let It Be This) 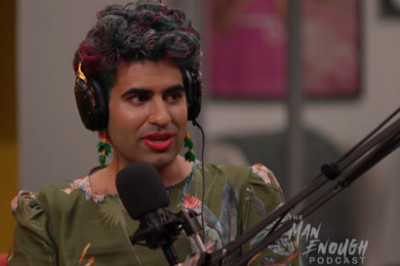 Here’s an excerpt from gender-nonconforming scholar and artist ALOK’s conversation on the Man Enough Podcast, when Podcast host Jamey Heath asked them why cisgender men aren’t ‘fighting’ for trans and gender variant people:

One of the things that I try to do in my work is say, "Don't show up for me because you want to protect me, or you want to help me. I don't need your help. I have an unshakable and irrevocable sense of who I am, because I am divine."

I come from people who were exterminated, and targeted by colonists, because the gender binary, we can get into this, was super imposed on Black people, Indigenous people and people of color, by European colonists. And the reason that they targeted us is because they knew our power, right.

So the reason that there's so much animus against me is because of my power -- I don't need to be legitimized or, I don't have anything to prove. What I want us to rephrase the conversation as, "Are you ready to heal?"

And I don't think the majority of people are ready to heal, and that's why they repress us as trans and gender variant people, because they've done this violence to themselves first. They've repressed their own femininity, they've repressed their own gender nonconformity, they've repressed their ambivalence. They're repressed their own creativity, and so when they see us have the audacity to live a life without compromise where we say there are no trade offs, where we say we actually get to carve in the marrow of this earth, and create our own and create our own God damn beauty, instead of saying, "Thank you for teaching me another way to live," they try to disappear us because they did that to themselves first, so I guess I would rephrase your question to be, "Can you help me get free?" Not, "Can you help me help you?"