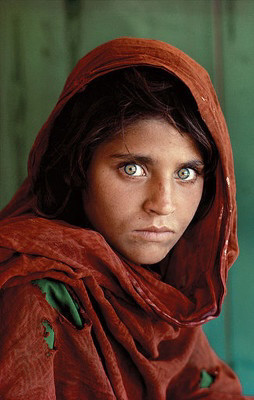 Thank you for sharing ♥️

In light of Italy evacuating Sharbat Gula, a reminder to analyze media-ethics and autonomy:

During a morning in 1984 spent documenting the Nasir Bagh refugee camp in Pakistan, photographer Steve McCurry made one of the world’s most recognisable photos when he came across 12-year-old Sharbat Gula’s sea-green eyes in an all-girls religious school.

For 17 years, Gula was referred to as the ‘Afghan Girl’ from the cover of National Geographic’s June 1985 issue. Her name remained unknown till McCurry travelled to Pakistan in 2002 to find her.

According to the 2002 article, Gula’s parents were killed by a Soviet bombing in Afghanistan, after which Gula, her four brothers and their grandmother walked to Pakistan through snow-covered mountains.

According to The Wire, Gula’s mother died from appendicitis, and her father was still alive during the move to Pakistan. She was angry about being photographed by a man outside her family, and covered her face, before being asked to lower her hands.

Gula's direct quotes reflect a resilient Pashtun woman who wants to empower her children with education and refers to her burka as a “beautiful thing to wear, not a curse.” The surrounding NatGeo text stands in contrast as the article reads: “Faced by questions, she retreats into the black shawl wrapped around her face, as if by doing so she might will herself to evaporate. The eyes flash anger. It is not her custom to subject herself to the questions of strangers.”

Gula had mixed feelings about the photo according to BBC: the media attention led to 15 days of imprisonment and deportation, but also contributed to helping widows and orphans —she wanted to establish an NGO that offers free medical treatment.