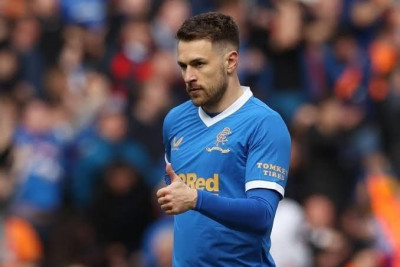 Aaron Ramsey thanked supporters for their overwhelming response and support
through the highs and lows.

Aaron Ramsey has posted a farewell message thanking Rangers fans for their support through the highs and lows of his four moths stint at Ibrox.

The 31-year-old Wales international joined the Gers on a loan from Juventus in January
and with his short term deal expiring at the end of the season, it looks like his time with
the Glasgow club is over now.

Ramsey failed to have the impact many supporters had hoped and after 13 appearances out of which nine were as a starter - his last outing in light blue ended in
despair when his penalty miss proved decisive as Frankfurt beat Rangers in the
European League final in Seville.

The former Arsenal midfielder was an unused substitute in Saturday’s Scottish cup
victory over Hearts, but he posted a picture of himself smiling with the trophy on
Instagram on Sunday.

“A very nice way to finish the season, especially after the big disappointed Wednesday.”he wrote.

“Thank you everyone for making me feel so welcomed.”

“It was an incredible few months and I am proud to be a small part of this club’s rich history. Thank you Rangers.”

He then posted another picture of himself and his son in empty Ibrox, adding:” To the
blue sea of Ibrox - I want to thank you all for your overwhelming support through the
highs and lows.

You are some of the most passionate fans I have ever had the pleasure of meeting.

Once a Ranger always a Ranger.”

Ramsey is under contract with Juventus until the summer of 2023 but has fallen out of
favour with the Italian club.