A budget for the ‘squeezed middle’ – but will it be the political circuit-breaker Labour.... 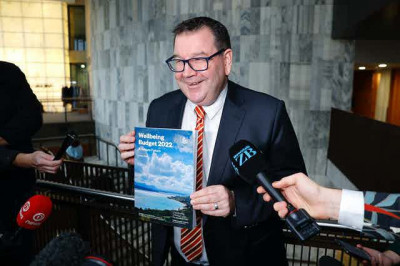 One any to make sense of Finance Minister Grant Robertson’s fifth budget speech was to see it as a political performance working on different levels.

First, Labour needs this budget to do an immediate job – address concern with the cost of living. Following two years of pandemic-dominated politics, Robertson had to tell a compelling story about his plans for tackling mounting fuel, food and other prices.

Reminding people that some of this is beyond the government’s control is not a winning strategy. Handing out something tangible was imperative today – hence a NZ$1 billion cost-of-living package, including a one-off $350 cash payment for some 2.1 million low- and middle-income earners, and extended public transport subsidies and fuel excise cuts.

But the government also wants a reset in its head-to-head with a resurgent National Party. Many voters have moved on from the pre-Omicron phases of the pandemic. And with a genuine contest looming at next year’s election, Labour and the Greens will be hoping today’s announcements serve as a political circuit-breaker

Some of the big-ticket items – chiefly the health reforms and Emissions Reduction Plan – speak to the longer term. We can imagine the government will be closely watching the Australian federal election this weekend to see how much climate policy influences voters’ choices.

Finally, there may also be something deeper going on. As reaction to today’s budget rolls in, we’ll get a sense of New Zealanders’ ongoing appetite for a more active and engaged state. Here and internationally, the pandemic years have represented a break with small state orthodoxy.

And while Robertson reassured voters and markets that this is a prudent, sustainable budget (many governments would walk over broken political glass for a projected surplus in 2025), the National and ACT parties will seek to portray Labour as fiscally profligate. Whichever narrative prevails will go a long way to determining whether Robertson delivers a third-term budget.