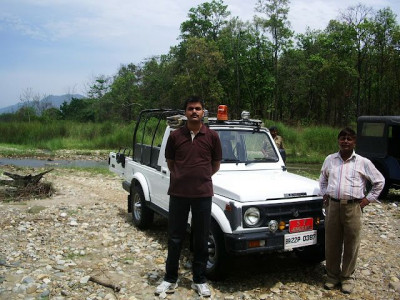 Of the constant flurry of visitors reaching round the clock at the residence, while many met in the confidential office chamber, there were some others who did not want to meet in the open for the fear of being identified. There was an atmosphere of suspicion all around as many even in the police department were not above doubt and could have been supplying information to the gangs about people meeting the SP as well as about the surprise movements of the forces.

Such confidential visitors were met behind the residence on the river banks either in the early morning or late at nights. They generally would either call on the mobile phone or send message through someone and a secret meeting would soon be organized.

It was in these days that I befriended Satishji, a veteran forest lover and still a bachelor hailing from Bagaha, who had spent much of his life exploring the forests of Valmikinagar. He had earlier probably also been a good hunter, but with the change of forest laws had now become a narrator of the adventure stories which could no longer be practiced or witnessed in the present. He was well known to most officers who had served in Bagaha and shared a good camaraderie with all and this I could feel immediately after joining the district on the very first day when he had arranged dinner for the camping Divisional Commissioner and the senior Police officers. In this first dinner I had in Bagaha, he had arranged for special local prawns and fishes which had been well fried with spices and make a good snack that went well during the talks in the evening. He soon became a regular visitor at the SP residence and also accompanied me during some trips to the remote forests and diaras in search of criminals, when his presence served as an additional source guiding me about the characteristics of places being visited and of species being encountered in the wild.