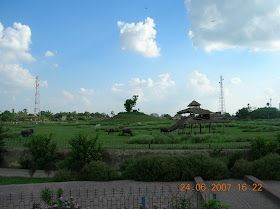 During the excavations made by Cunningham, he found some mounds covered with fragments of bricks, and also the trace of the walls of small brick buildings on their summits.

These may also have been the retaining walls of circular terraces. In another excavation of these superficial brick ruins, Mr. Lynch, Deputy Magistrate of Motihari found a seal of black earthen ware, bearing a short inscription in characters of the Gupta period. The inscription, which consists of four letters, reads Atavija which may mean the “forest born” or “the cause of motion”. At the end of the name there is the Swastika, and over the name in the middle is the symbol of Dharma, and to the left, in a slanting direction, a trident or trishul. This discovery shows that the site was occupied by Buddhists till the Gupta-age.

The heart of the mound is formed of a extremely hard whitish clay used by locals as a light coloured clay wash for the walls of their houses. The clay was indeed so hard that it turned the edges of common digging tools. When freshly cut, it glistened and had a bluish tint. This is not found near the site at present and the source is unknown. The origin of the soil for these mounds was also not clearly known. Between the mounds and the village of Lauriya is the dry bed of an annual flood stream called as the Tarkaha Nala, where the soil is light and sandy.