1. Silent Pages of History : The remains of Ancient Vaishali 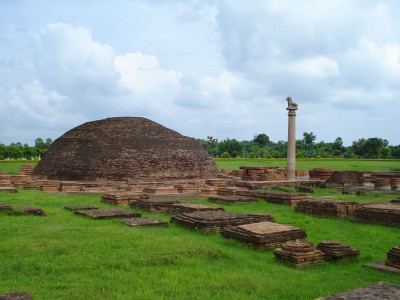 1. Silent Pages of History : The remains of Ancient Vaishali

Three le north-west of the city there is a tope called, “Bows and weapons laid down.” The reason why it got that name was this:— The inferior wife of a king, whose country lay along the river Ganges, brought forth from her womb a ball of flesh. The superior wife, jealous of the other, said, “You have brought forth a thing of evil omen,” and immediately it was put into a box of wood and thrown into the river. Farther down the stream another king was walking and looking about, when he saw the wooden box (floating) in the water.

(He had it brought to him), opened it, and found a thousand little boys, upright and complete, and each one different from the others. He took them and had them brought up. They grew tall and large, and very daring, and strong, crushing all opposition in every expedition which they undertook. His inferior wife asked what it was that made him so, and he replied,

“That king has a thousand sons, daring and strong beyond compare, and he wishes with them to attack my kingdom; this is what makes me sad.” The wife said, “You need not be sad and sorrowful. Only make a high gallery on the wall of the city on the east; and when the thieves come, I shall be able to make them retire.” The king did as she said; and when the enemies came, she said to them from the tower, “You are my sons; why are you acting so unnaturally and rebelliously?” They replied, “If you do not believe me,” she said, “look, all of you, towards me, and open your mouths.” She then pressed her breasts with her two hands, and each sent forth 500 jets of milk, which fell into the mouths of the thousand sons. The thieves (thus) knew that she was their mother, and laid down their bows and weapons.  The two kings, the fathers, thereupon fell into reflection, and both got to be Pratyeka Buddhas. The tope of the two PratyekaBuddhas is still existing.