S 6. Diary of a Cop : Biodiversity of the diaras 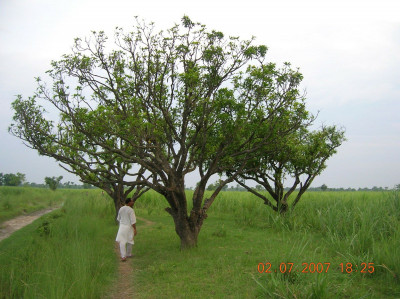 The streams took at least one full day to become fordable again after a good rain and in the circumstance of one getting stuck in this part of the district during rain, there was no other way but to pray to the rain god which we soon realized as I would subsequently narrate about the times when once travelling on an inspection trip, I had to camp for three consecutive nights at Gobrahiya rest house dependent only upon the frugal provisions which could be procured from the small village as it rained continuously for about 2 days.

Another set of 4 Police stations was located on the other side of the river from Bagaha, which could either be reached by crossing via boats and thereafter walking for miles or by travelling via the sole bridge at Paniyahwa which connected Bagaha to areas of Kushinagar district in Uttar Pradesh where too the roads though ‘pucca’ and recently carpeted had some basic fault in engineering and gave a very bumpy ride even at moderate speed.

In any case, it took no less than three hours to reach Piprasi or Dhanha PS, while reaching Thakraha by road used to consume four hours and often made one feel as if on a visit to some god forbidden territory which had not seen the light of development or even electricity due to its being physically located in an almost inaccessible part of Bihar, even as it was connected to a well-developed marketplace in the neighbouring Uttar Pradesh. The need of a bridge which could connect Bagaha with the other side near Dhanha was very much felt, and later I was happy to learn that the project was soon taken up by the Government after I had left the district and that its existence today is a reality. Valuable for the economy and connectivity greatly, the only damage that the construction of the bridge may have caused would have been to the fragile ecosystem in the diaras through which it must have passed. These diaras near Nainaha and Ratwal were the most pristine ones and contained a huge biodiversity.