S 5. Visit to Kurkihar: The Ancient Legend of Kasyapa at Kurkihar 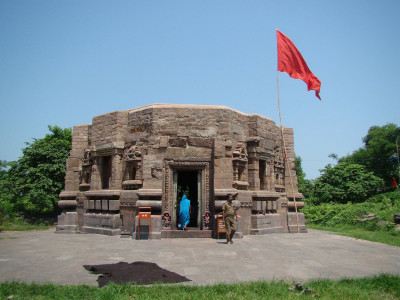 In the report of 1879-80, Cunningham mentions that he again visited Kurkihar with the object of exploring the hill to the north of the town, as it was the scene of some of Maha-kasyapa’s miracles, and eventually of his nirvana or death. He mentions the account of Kurkihar as given by Fa Hian (Translation by Herbert A. Gilles) as follows – “The great Chia-yeh (Kasyapa) is at present at the mountain. He split the mountain to get in. The place where he entered will barely admit a man. Going down to a great distance there is a niche in which stands a full length image of Chia-yeh. Outside the niche is the place where he used to wash his hands, and the people of the district, if they have some headache, use this earth (from that spot) for plasters, and are at once cured. Therefore, since that time there have been Lo-hans on this mountain, and when the devotees of the neighbouring countries come yearly to make their offerings to Chia-yeh, the Lo-hans appear by night to the steadfast ones, converse with them, and resolve their doubts; then they suddenly vanish. On this mountain there are quantities of trees; also a great many lions, tigers, and wolves; so that the travelers have to be cautious.”

He further mentions that Hiuen Tsang mentions the hills as lofty and scarped, with three bold peaks that spring into the air. These peaks have been identified by Cunningham already with the three peaks of the Murali mountain nearby at 3 miles from Kurkihar. According to Hieun Tsang “twenty years after he had received Buddha’s instructions, Kasyapa ascended the Kukkuta-pada mountain on the north side, and walked along towards the south-west. He struck the rock with his staff, and cleft it into two, and then marched boldly into the heart of the mountain. On reaching the middle peak, he took up Buddha’s chivara (dress). The three peaks approached and retired (or closed and opened) according to his mere wish. When Maitreya visited the mountain, Kasyapa presented him with the Chivara of the Buddha, and after performing some miracles, entered into nirvana.”