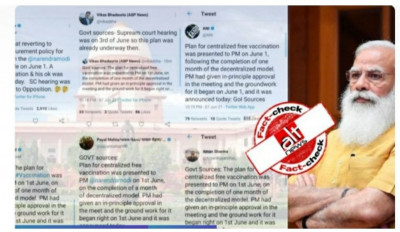 Here is part 4 of the Alt News investigation...

From April to mid-May, India was hit by a devastating second wave of COVID-19. The nation saw health infrastructure collapse and an alarming numbering of deaths. Close to two lakh deaths have happened since April.
In the backdrop of the second wave, the Government of India announced a “Liberalised and Accelerated Phase 3 Strategy” for vaccination. One of the points about vaccine procurement stated, “Manufacturers would transparently make an advance declaration of the price for 50% supply that would be available to State Govts. and in open market, before May 1. Based on this price, State governments, private hospitals, industrial establishments etc would be able to procure vaccine doses from the manufacturers.”

Manu Sebastian told Alt News, “In April at least six High Courts were considering cases related to pandemic management. On April 22, the Supreme Court announced that it was taking suo moto cognisance in re-distribution of essential services and supplies during the pandemic. The focus areas were identified as — supply of oxygen, supply of essential drugs, method and manner of vaccination and power to declare lockdown. The first elaborate hearing took place on April 30 when a bench comprising Justices DY Chandrachud, L Nageswara Rao and S Ravindra Bhat highlighted several flaws in the Liberalized Vaccination Policy. In the order passed on April 30, the Court prima facie observed that the Centre’s vaccination policy was detrimental to right to life and right to health and asked the Centre to have a rethink of the same.”

Sebastian added, “The next hearing took place on May 31. In this hearing, the Apex Court observed that the Centre’s response to April 30 order was not satisfactory. During the elaborate hearing held on May 31, the bench flagged several issues with the dual pricing policy, the different procurement process for states, the digital divide of CoWIN app etc.