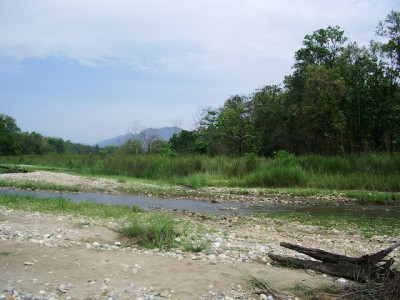 After some time the headlight was visible at a distance, and the boat finally reached Bagaha by about 11 p.m., with a tired driver and Mahtoji, who together narrated the story of how they had managed to get the boat back with the help of local boatmen after being replenished with fuel at three places.

Undeterred still, the adventures at Bagaha continued on and on with every day conveying some new possibility. I received several visitors and friends during these days as moving with them made the jouneys and adventures even more exciting. My younger brother stayed with me for about a fortnight in June/July after the memorable night we spent in the river and we could spot a tiger near Ganauli during a trip along with other wildlife. The diara of Nainaha soon became my favourite adventure destination where I would just drive down at any hour of the day or night. Almost all who visited me were definitely taken there for a pleasure trip. Apart from travelling all around, I could also at times find some gap for fishing and bird watching apart from observing daily sunsets on the Narayani. I would be writing more on the adventures in the next chapter when I would also be recollecting the stories behind some surrenders and kidnappings during my initial tenure.