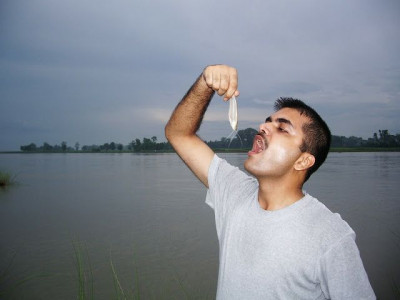 This approximately was the time that a road journey then would have taken to reach the same destination. Encouraged by the results of the boat adventure so far, we chatted over snacks and tea as more fuel was being procured for the boat. It had been quite nice so far, and at this point of time we still didn’t know what had awaited us ahead for the night.

About 60 more litres of fuel was collected as we moved towards Ratwal ghat at about 8.30 p.m. after having a heavy snack to take care of hunger by the time we would reach Bagaha. The officer-in-charge of Bagaha was also asked to keep ready fuel not less than 40 litres for emergencies in case the fuel would get exhausted before we reached Bagaha.

As we boarded the boat back at Ratwal ghat, the weather looked seemingly clear and we were in quite high spirits hoping for a comfortable ride back to Bagaha. It was going to be about 5 kms back to the river via the canal from Ratwal. From there it was going to be a smooth ride I had felt but the optimism was to receive a jolt soon. Only after about 10 minutes as we left Ratwal ghat and entered the canal, the motor boat got stuck at an unsuspected location where we had sailed well just about 3 hours ago. The boat was equipped with a long rope which now became handy as Mahtoji, a hardworking Homeguard jawan belonging to the Tharu tribe from the hilly areas of the district jumped out from the boat onto the grassy canal bank and pulled it out with some effort.