S 33. Diary of a Cop : Anecdotes from my journey on the river 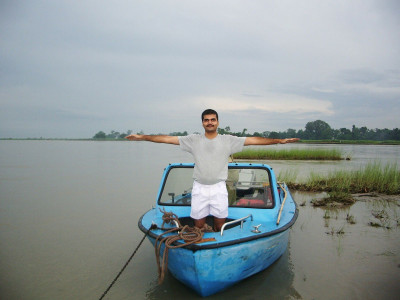 It was a good start as we soon crossed the ghat behind the Bagaha Police Station at a distance of about 6 kms. The river had swelled up after the rains, and with a lot of water there was no problem in driving the boat. We were going downstream and were supported by the flow of the Gandak, when upon foreseeing some trouble in returning by the night due to the swollen waters, Satishji advised that we should get back as the sun was about to set and as after sunset there could be problems which he still didn’t clearly define.

But I got support from my driver Pashupati who seldom worried about any unforeseen problems and always beamed with confidence as we moved through in Bagaha. The more the trouble in the way, the more interesting and adventurous it became was the maxim we generally adopted while moving carefree in the remote patches of the district. So, we decided to go further in the river journey, no longer worrying about it getting darker.

As we moved further, we realized that the fuel was about to finish and going further upstream would simply be impossible. Since we were near Ratwal at that time, we decided to camp at Ratwal for sometime and to procure more fuel for the return journey. I called up my friend from Ratwal on phone and informed him about our plans, as he started towards Ratwal Ghat to receive us. Sheomuni Prasad, the District STF in-charge was also called to assemble with force and 60 litres of fuel at Ratwal Ghat.

From the river we took the route along a small canal for about 5 kms to reach Ratwal Ghat. This canal usually had very less water in other seasons, but had enough water to probably drown a human at this time making it perhaps quite comfortable for our boat to tread through. We reached Ratwal House from the canal at about 6.30 pm sitting in the police jeep from the Ghat.