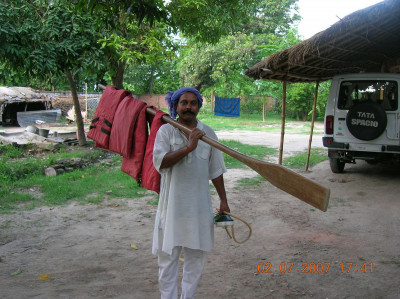 Around February, I had discovered that the police department had a good motorboat which due to some technical lacuna was lying unused and neglected in a corner of the town. I tried to get it repaired in March and was finally successful when it started working towards the end of May. But even as it became usable towards the end of May, 2007, the low level of waters in the river made navigation for long distances difficult. Coupled with the problem posed by the river sands, it used to consume a lot of fuel amounting to not less than 20 litres of Petrol per hour as it moved.

One would have needed to carry extra fuel depending upon the number of hours that one intended to float. I was waiting for the onset of the rains and planned to move into the most inaccessible regions of the diara in rainly times when instead of walking for miles, travelling by the newly repaired motorboat would have been the better option, was what I supposed. By the month of June, the monsoons had already arrived and more waters were now available in the Gandak making it more navigable than earlier when the motorboat blades often used to get stuck in the weeds or sands which could not be seen from above the waters in the vast riverbed.