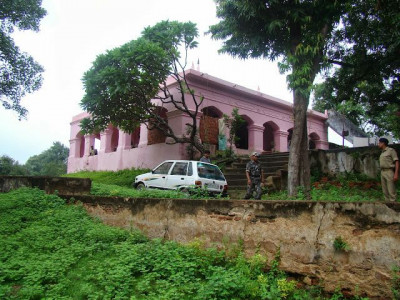 Describing the site further as seen in 1861-62, Cunningham has mentioned :-


“The principal statue is a squatted figure of the ascetic Buddha under the holy Pipal tree, or Bodhi-drum. Overhead there is a representation of the Nirvana, or death of Buddha, and on the pedestal there is an inscription in three lines, which is incomplete owing to the loss of a projecting corner of the base. To the right and left there are smaller figures of Maya standing under the Sal tree at the birth of Buddha, and of Buddha himself teaching the law at Banaras after his first attainment of Buddhahood. On the mound to the east, there is a standing figure of Buddha, with a small attendant figure holding an umbrella over him. As this attendant has three heads, I believe that it represents the Hindu triad in the humble position of a servitor of Buddha.”

During the visit in August, 2013, I could nowhere see any such statues at the site and it seems that they might have been later removed from the site and placed in some museum. However, no one at the site could provide any explanation.

Regarding the inscriptions at the site Cunningham mentions :-


“I procured several short but interesting inscriptions at Kurkihar. The name of Sakala is mentioned in several of them, and also Kerala in Dakshinades. The age of these inscriptions, judging from the shapes of the letters, must be about A.D. 800 to 1000.”