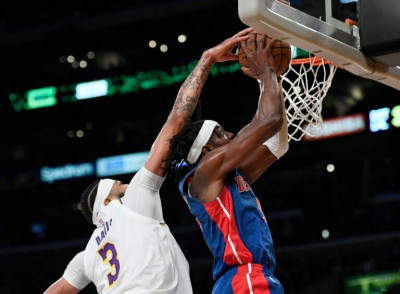 The Los Angeles Lakers continue to have an up and down season, injuries and COVID-19 have plagued the season for the purple and gold.

With Anthony Davis out for a prolonged period of time, the Lakers are missing their defensive anchor that since the trade that brought him to LA has been the focal point of the Los Angeles Lakers defense.

Without Davis, the purple and gold have been forced to put out experimental line-ups that have had mixed results.

On one hand, the Lakers have looked very solid at times when LeBron James has played the 5-spot in a small-ball lineup.

On the other hand, they are getting torched at the rim at an alarming rate. Game after game, it seems that each team they come up against turns into the Lob City Clippers and are repeatedly throwing up alley-oops that are rarely being contested or at times simply just allowed to happen without any fight.

Teams seemingly don’t respect the Lakers’ ability to protect the rim with Anthony Davis out and with the sharp decline of DeAndre Jordan. Dwight Howard gets occasional minutes but Vogel seemingly wants to stick the course of small-ball lineups so he can use it to good effect come playoff time.

When Anthony Davis comes back, the purple and gold should be able to put some fear back into opposing teams around the rim.

One area of considerable need is an additional wing player who can free up the likes of LeBron James, Anthony Davis, and Russell Westbrook to do their own thing.