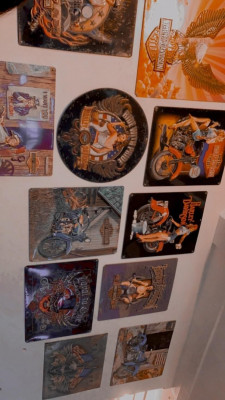 India with its rich cultural heritage having art forms as varied as its culture and people is now on the verge of losing some of its ancient art forms forever.

1. Warli Paintings: Even though it is remarkably similar to those art forms done between 500-10000 BCE at Rock Shelters of Bhimbetka, Madhya Pradesh, this ancient art form may have begun in 10th century. The primal tribal motifs, which are basic but have a deeper significance are the beauty of Warli paintings. This art form has starting fading away from people's life.

2. Manjusha Paintings: Anga Pradesh (Bihar) is where this art form began. It is thought to be India's sole art style that is shown in series, each symbolising a different story. During the British administration this art flourished in India. In the middle of 20th century however its popularity decreased. Attempts are being made by the Bihar government to resuscitate this craft.

3. Parsi embroidery: India's unique textile legacy includes Parsi embroidery. This art from originated from Iran and over time absorbed elements from European, Chinese, Persian and Indian cultures. Only few of Parsi Gara Sarees (Sarees with Parsi needlework) are found in the markets nowadays due to dwindling Parsi community and mass production of inexpensive clothing.

Many of its arts are vanishing and India, the land of art and craft is on the verge of losing its culture and legacy. Modernization and Industrialisation are making these crafts more and more obsolete. Many craftsmen and artisans are becoming impoverished as a result of fewer consumers and are being forced to look for another occupation.