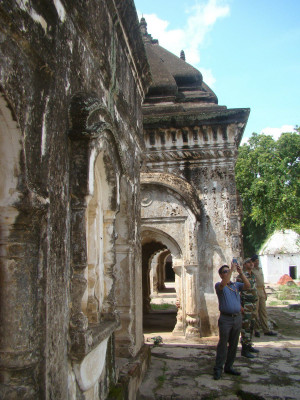 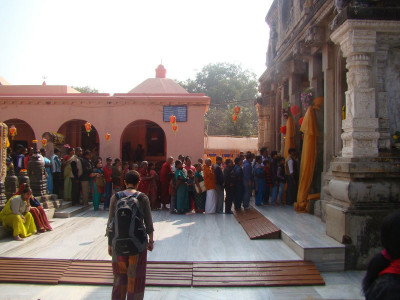 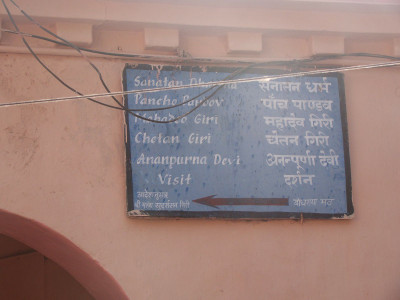 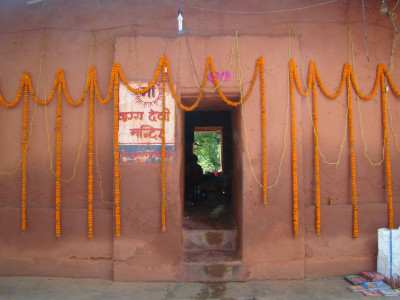 Just in front of the Mahabodhi temple is built a samadhi of the founding Mahant Shri Ghamandi Giri. The Samadhi is a construction of the early seventeenth century. Buchanan mentions:-

“South from thence has been a tank. West from these two masses of buildings has been a court surrounding the two principal objects of worship, that is, a Pipal tree placed on the west side of a terrace forming the lower part of a (Mondir) spire or pyramid, containing the image of Mahamuni. The arched way led from the cast into this area in front of the great Mondir. On the right in entering is a small brick chamber, probably modern, and containing no image. On the left are two small chambers, both modern. That nearest the entrance contains several large images said to have been taken from the ruins and built into the wall. Five of them represent in the usual sitting posture adopted by the Buddhists to represent their Munis are said by both the orthodox and heterodox to represent the five sons of Pandu, who are claimed by all sects. The other small chamber is the tomb (Somadh) of the first Mahant of the convent of Sannyasis.”


“Close to the Great temple there is a small plain Samadh or cenotaph, over the remains of the earliest Brahmanical Mahant. This is of no interest in itself, but the vestibule in front is supported on nine square sand-stone pillars, which have once formed part of a Buddhist railing, similar to those at Sanchi near Bhilsa, and which cannot be of much later date than Asoka. Many similar pillars, but of granite, support the arcades in one of the courts of the Mahant’s residence. A few of them bear an inscription in the ancient Pali characters of Asoka’s well known records, Ayaye Kuragiye danam, i.e. “Gift to the holy Kuragi”. There are altogether 33 of these pillars still remaining, of which five or six bear the inscription.”