S 25. Diary of a Cop : An investigation into the misdeeds of local cops 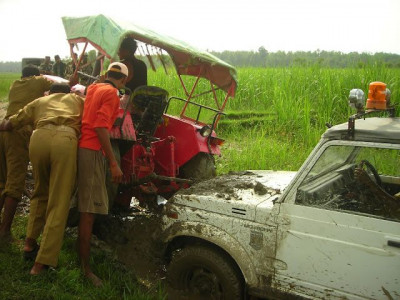 Such a vehicle had earlier never been seen by the villagers residing in the ‘Don’ area, so named due to its being a valley between two hill ranges of which one was on the Indian side whereas the other lay in Nepal. It was about 4 p.m. when I reached Gobrahiya Forest House, where after a cup of tea and refreshments I decided to go and inspect the Police Station. At this point of time I noticed several villagers assembled near the main portico of the Guest House who wanted to meet me.

They complained about the behavior and deemed atrocities of the local Officer-in-charge who would reportedly often threaten the villagers and extort money under the threat of possible arrest. A few cases were narrated before me as I left for Gobrahiya PS and started with the inspection.

As the inspection continued, I noticed that the O/c had been very negligent and irresponsible in his conduct and was not seemingly befitting the post he was holding. I ordered his suspension immediately and noticed no remorse or guilt in his eyes even as the other officers accompanying me watched on.

Just about this time, when the atmosphere had become tense due to the punishment meted out for his irresponsible conduct with me being angry and internally pained, a severe storm started flipping the doors and window panes of the old police station building as papers flew into the air. People started rushing helter skelter to close the window panes and unhappy with the sudden results of the inspection, I left the Police Station immediately to reach the Forest Rest House from where I intended to start upon the return journey via Harnatar or Valmikinagar to Bagaha as the vehicle had been tested and found to be quite effective even in the undulating terrain during our trial in the day.