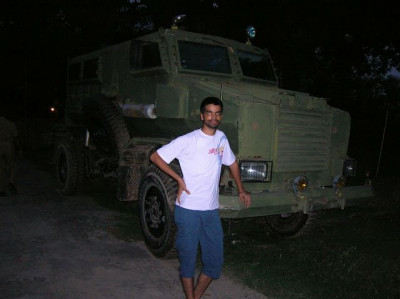 I was always looking for different ways to move around the district and had by the beginning of February created a basic kit with sleeping bags and other basic requirements like emergency lights etc. which could enable camping even in the open. I was more prepared for outdoor camps and tried camping at different locations in the district regularly to make the police impact felt. At times I would use the train to go to Ramnagar from Bagaha and would return by vehicles. The movements always had a surprise element and I would seldom use the same route on the return journey. A new Landmine-proof vehicle had arrived in the district in February and I wanted to test its effectiveness in the jungles and undulating hills of Bagaha, where the Maoist threat loomed large. After surrender of a group of Maoists towards the end of January, which is part of the next chapter of stories from Bagaha,

I wanted to visit more families of the Maoist cadres in order to convince them to persuade their relatives to surrender and join the mainstream taking advantage of the rehabilitation package offered by the Government. On one of the days, I planned to supervise a case in Goverdhana PS near Ramnagar and further to try using the Landmine-proof vehicle to reach and inspect Gobrahiya PS using the forest road from Ramnagar. I started for Ramnagar in the evening and planned the visit to Gobrahiya for the next morning after a visit to Goverdhana and to return back to Bagaha by the night. After supervising the case near Goverdhana, I started on a long journey which took about 4 hours from Ramnagar to reach Gobrahiya PS. The DSP of Ramnagar along with the Officer-in-charges of Ramnagar, Cheutaha, Semra and Goverdhana Police Stations also accompanied me for the trip to Gobrahiya since I was travelling by a new medium which was a cause of quite excitement.