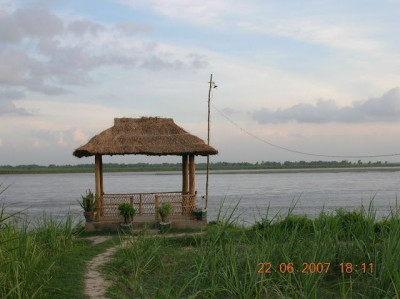 The evening passed off well as we reached Valmikinagar guest house where we had a relaxed dinner amid interesting chats about forest life and adventures. After the dinner, I requested to bid departure to Bagaha to see my wife who was waiting having asked me to return back in the night. Seldom did she realise what returning in the slightly foggy night on the haphazard roads passing through the jungles could  have meant, but I wanted to keep my promise as she had just arrived in a totally new house on just the previous day. As we returned in the night, we rushed back without the facility of the spotlight that we had on the onward journey.

It was a lonely and quiet return till Madanpur, about 10 kms before Bagaha, and I was feeling sleepy when I was suddenly attracted by the whisper of one of my bodyguards named Nasrullah. A leopard was being seen just in front of the vehicle quietly walking by the roadside as we were passing through a settlement near Madanpur forest rest house.

The Leopard may have been looking for some easy prey near the human settlement and was walking unchallenged on the road late at night as it was already around 1.30 a.m., and the villagers well slept inside their houses in the cold and foggy winter night. I reached home at around 2 am and got up early in the morning to reach Valmikinagar to join the seniors for breakfast at about 9 a.m.