S 2. Silent Pages of Konch : My visit to the town Konch 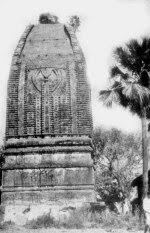 As I approached the town of Konch, I kept thinking about the situation in the early 19th century which has led Buchanan to write the above words about the local populace, and also wondered whether any fundamental change had occurred even after two centuries. So busy we are in our daily chores of existence, that seldom one has the time or curioisity to gaze at the wonders left behind by our predecessors on the planet. I remembered the words of Robert Frost perhaps as the reason for the neglect of such sites by us who think of more valuable things to do than to admire the work left by our ancestors.

“The Woods are lovely dark and deep.

But I have promises to keep.

And miles to go before I sleep.

And miles to go before I sleep.”

The one hour drive from Gaya to Konch was picturesque. Small hills were visible at a distance from the road, and the fields were interspersed by seasonal streams some of which contained flowing freshwater quite clear after the monsoons. Several old and impressive temples could be seen on the way from Gaya to Konch. Some of these looked quite ornate, and would need a separate description altogether.

As we reached Konch, we asked a few residents about the oldest temple nearby, which surely was the one that I was looking for. None of them could give a satisfactory answer and looked puzzled on being asked. Then I thought that it was better to visit the Police Station and seek details of the oldest temple of Koch. At the Police Station too, the information was not readily available, however I was informed and pointed towards a temple at a distance of a kilometer as may be the temple being looked for since it was recently taken over and repaired by the Archaeological Survey of India. Now I knew that the temple was not very far. Actually, from a distance the temple doesn’t look as ancient as it is. It has been painted red very recently, and is thus misleading from a distance.