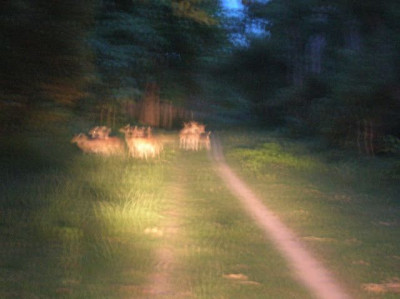 On the way to Valmikinagar, we all had adjusted ourselves in an open gypsy where Satishji accompanying us decided to act as the spotter while the senior IG decided to drive in order to introduce me to the art of moving safely in the forest areas in the night. With other vehicles moving behind us, the low noise emitting gypsy created minimal disturbance in the surrounds where one was supposed to remain silent to not disturb animals likely to be spotted since they ran away struck with panic the moment they heard any human voice.

Returning back to the signage lessons, I should mention that the light was to be shown on the bonnet of vehicle to indicate to the driver that he needed to stop as something had been spotted in the vicinity. Thereafter the directions of the light advancing were supposed to indicate the direction in which the vehicle should proceed.

It was interesting to learn these tricks as animals in the wild were indeed spotted on the road sides as the gypsy moved along to Valmikinagar in the evening. Without such a facility, one could only see animals which were on the road or crossed the road and became visible in the head light of the vehicle. Best of all, the spot light seemed really useful for the police in the dasyu infested police district as the dasyus could not afford to hide in the bushes during police movement with these special lights in the night. Another caution I learnt that night was that one should never take the name of a rabbit or hare if spotted as it reduced the probability of spotting more animals for some unknown funny reason as believed by hunters in the past. It was usually addressed as ‘Manhuswa (One that brought bad fortune)’ or ‘Lambhkarna (One with large ears)’.