S 18. Diary of a Cop : The real beginning of the Forest Adventures 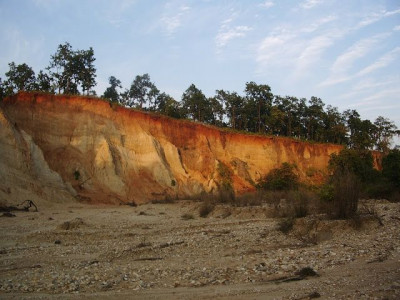 After several trips to the diaras and a wonderful and memorable round of the jungle with Kamaljit, my actual detailed visits to the dense jungles started after 27th of December, 2006, when the IG, highly interested in forest adventures and spotting wildlife, visited from Muzaffarpur, accompanied by the DIG from Bettiah. I received the duo who had arrived along with their families at Bagaha Railway station, and escorted them to my residence for tea and snacks. Since my wife had just arrived the previous day from Patna and was not in the best of health, she could not accompany us to the jungles in the afternoon as we left. She, however, wanted me to return from Valmikinagar by the night, and to join the senior officers on the next morning for the jungle safari, hardly realizing what the journey from Bagaha to Valmikinagar on the bone-shaking roads ever meant. Having reached from Muzaffarpur by train, she still had to encounter the degree of bad roads that this part of Bihar had to offer in those days.

The IG had been to Valmikinagar several times earlier as well and seemed quite familiar with the jungle terrain. The journey to Valmikinagar was a very interesting and motivating one as they talked about having spotted tigers during the earlier visit and also shared stories about jungle adventures of IPS officers in the past. On this particular day, I got introduced to a new device called ‘spot light’ which was told to be of great use in spotting movements of criminals alongside the roads and also for wildlife which was the motive behind its design. It consisted of a light bulb fixed to a holder with connecting wires which could be connected to the battery of the vehicle and could be held by someone to shed light on the dark surroundings as the vehicle moved.